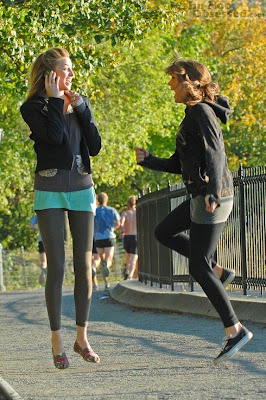 Ugh. Looks like the producers/creators of Whitney’s new Hills spinoff, “The City” are already giving up. You know how on The Hills now they don’t even bother shooting scenes of Heidi in her “actual” office because they know we don’t believe she works there? They just have her sit in the lobby and they’re like “Fine. Cut. That’s a wrap everybody.” Well I feel like they must already be doing this with Whitney. Did they just photoshop her into this New York scene? I mean, I only ask this because Whitney’s feet are not even on the ground and, let’s face it, the concept of Whitney knowing how to talk on her cell phone and jump AND film a scene at the same time isn’t too probable.
I may talk a big game, but regardless I’ll be watching this show with the same intensity that I watch drunken homeless people try to readjust their tinfoil hats.
Thanks to IBBB reader, Maro, for alerting me of this photo and for INO for capturing the magic.
www.myspace.com/ImBringingBloggingBack