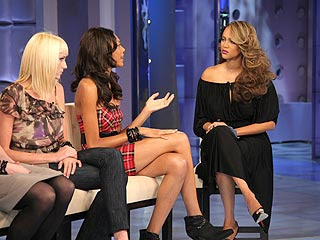 So you remember how that really fat chick from Hairspray and her dad got into a physical fight in a Caribbean airport with that really mean chick from America’s Next Top Model (who used to pick on the chick with aspergers) and her mom? Yeah, well now that really mean chick, Bianca, has taken to the Tyra Banks Show to discuss just what went down on that crazy day. Here’s the report according to People Magazine but please make sure to take notice of the part where Bianca says that Nickki Blonsky kicked her mother in the vagina. Pure comedy.
Golden says on the Oct. 8 episode of The Tyra Banks Show that her family was at the Turks & Caicos airport on July 29 returning from a family reunion for her dying grandfather when Nikki Blonksy became “very rude to my aunt.”
An argument erupted between Blonsky’s and Golden’s families, then Blonsky’s father Carl “punched my mom.” “He knocked her out,” says Golden. “He hit my mom with such force she stumbled back and when she stumbled back the whole family got up and attacked my mom.”
Then, when her mother was on the ground, Nikki “takes her foot and kicks my mom in her vagina, and that’s when my mom fell out completely,” says Golden. “When Nikki kicked my mom I went and grabbed her arm and she grabbed my earring,” says she. “Her mom sat on her to get her off of me cause her mom saw what was happening and that was that.”
Golden says her mother was airlifted to the hospital with internal bleeding, a broken nose and a fractured skull. “Her face is still black and blue,” she says.
Carl and Nikki Blonsky and Golden were all arrested on assault charges – the most serious charges against Carl.