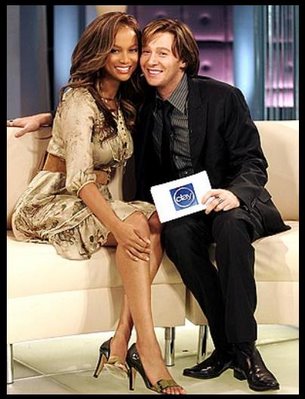 …and I’m not saying which is the chick and which isn’t or which is the dude and which isn’t. It’s kinda like a brain teaser, really. Clay sashed his way onto the set of Tyra and even got to have his very own cue cards! Wow, see it doesn’t matter that you didn’t win American Idol, you still have so much to be grateful for. I mean the Tyra Banks show really when you realize that you have arrived.

Clay spoke of such things as his new album, his hair, and that’s about all. No word yet if Tyra crushed him like a bug and ate him. One thing can be gaurenteed though; Tyra was loud, obnoxious, awkward, and not that funny.

The episode will air on Nov 22, so set your Tivo all you Clay Aiken fans…as if your Tivo didn’t think you were gay enough already!