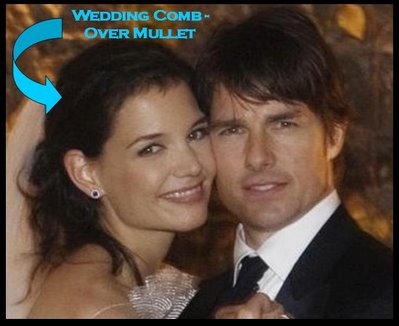 How many times can two people have the same wedding? And more importantly, why does it look like Katie Holmes has a comb-over mullet? Katie and Tom spent $2.5 million on their Italian wedding (cheap bastards), but that wedding was more just for “show.” The rep of Tom and Katie (possibly Xenu) confirmed that their official wedding actually took places earlier in LA. So, basically just as I always suspected this wedding was more of a skit with a lot of guest stars. I’m tired of talking about these two. Hopefully we won’t be hearing from them until their divorce, which my guess will be July 2007. See you then. Hopefully Katie’s Rogaine will start to kick in by then and she won’t need the comb-over anymore.