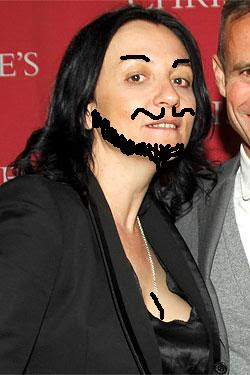 After being a complete mess/success on The Hills, Kelly CUNTrone has told the sunny New York Post that she’s working on a show with the producers of Project Runway that will showcase the nitty-gritty side of the fashion business. And to quote that beautiful beast of a woman, “Think of it as ‘The Wizard of Oz’ meets Stephen King meets Rhoda.”

So, uh that’s the pitch? That’s, uh, the one that you, uh, are really, uh, are going to, uh, go with? Uh, really? Hmm. Ok. It makes sense, I guess. But if we’re going to just open the dictionary, blindly choose words, and then use those words to help pitch a show I have an idea too. How ’bout this for a Hills spinoff:

Nana Pratt plans out all the details of her death, including buying her plot, updating her will, and interviewing limo drivers. It’s sorta like ‘The Nanny’ meets ‘Supermarket Sweep’ meets ‘$25,000 Pyramid’ crosses ‘Good Morning Miss Bliss.’