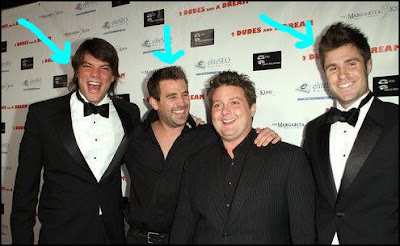 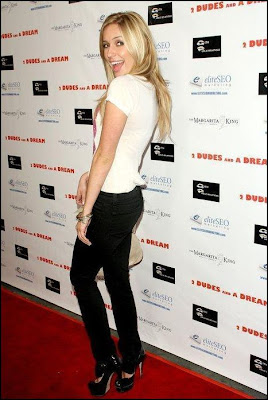 I don’t want to oversell this, but….JACKPOT! Remember Brian and Jordan from the first season of The Hills? One of them played the boyfriend of Heidi and the other played the kid who was chasing after Oddrina.
(Insert sarcastic overtone) I’m sure these dudes are kicking themselves for not sticking with those two prizes. Just think, fella’s, today you two could be Justin Bobby and Spencer Pratt.
Anyscript, those two dudes and LC’s ex-boyfriend/ex-Laguna Beach cast member, Jason Wahler, were all bloated smiles as they attended the premiere of “2 Dudes and a Dream” in LA the other night.
While Kristin Cavallari was not ever in The Hills, she was in Lagina Creek and also attended this event….and I sweat Kristin so I decided to add her photo too.