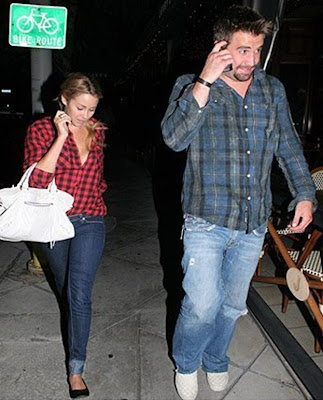 Spoiler Alert! If you don’t want to know anything that happens in future crapisodes of The Hills do not look at this picture of Lauren walking up the street with her ex-boyfriend Jason. I repeat, do not look at the picture of Lauren wearing a checkered lumberjack/Lindsay Lohan flannel shirt and her ex-boyfriend, Jason Wahler, walking directly next to her whilst on his cellular phone. Don’t look at it!
J Wahl told someone who would listen about a month ago that he was “in talks” to film a few scenes for an upcoming episode of The Hills. Hopefully they’re filming the scene where Jason gets drunk and cold-cocks LC right in her dark mustache. What the hell is up with that thing, by the way? In the latest episode it looked like she was starting to grow a full on goatee. Eh, I wouldn’t toss her out of bed for getting animal cracker crumbs on the sheets.