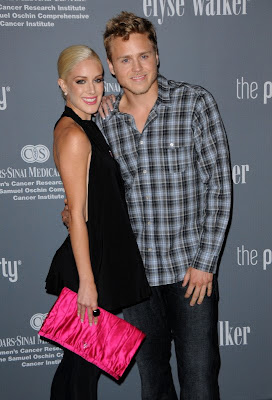 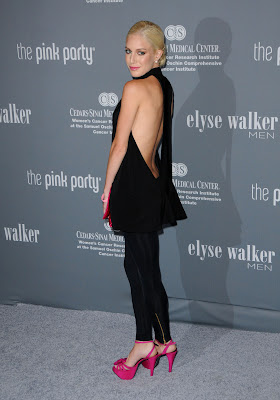 So is this Cindy McCain sub-storyline going to make it into future crapisodes of The Hills? Steve Sanders and Heidi Montard, who literally looks like a Q-tip, walked the gray carpet at the Pink Party in Santa Monica yesterday. Elyse Walker played host to the 4th Annual function that was held in Hangar 8 at the Santa Monica airport. Proceeds to the benefit will go to the Cedars-Sinai Women’s Cancer Research Institute. That’s a mouthful.

Anytip, Heidi is almost unrecognizable. I mean, not to me. I totally know every feature of Q-Tip Montard as I’ve followed her every move from when she walked that fashion show back in Laguna Beach, you know, the one where Dieter and crew tried to raise money for the millionaires who multi-million dollar homes started to slide off the hill during a major storm. Yeah, that one.

Moving on, it also looks like Steve Sanders may have eased up on the Sun-In he sprays on his head and face (for the Santa pubes) and, apparently, he’s back to the Brady perm. Let’s face it, there’s a lot going on with the both of them. A lot.