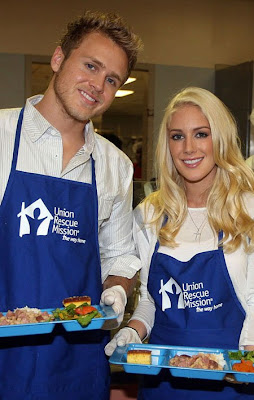 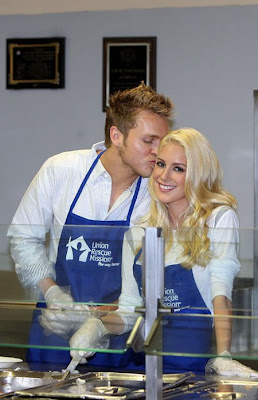 Heidi and Steve Sanders are continuing on with their “We Help People” press tour. This time around they’re scooping mashed potatos and toilet water sundae’s (I’d assume) at the Union Rescue Mission House.
I have a question. Why are Heidi and Steve Sanders wearing white gardening gloves WITH plastic gloves over their gardening gloves? They’re probably afraid they’ll “catch homeless” if they accidentally brush hands with the housing impaired. How come 2 sets of gloves, yet no hairnet? It doesn’t matter that these people typially eat out if dumpsters, I’m sure they don’t want to choke on Heidi’s Barbie hair that’s stapled to her head or Steve Sanders Santa pubes that are glued to his face. They’ve suffered enough. Let them alone.
P.S–> Before you send me hate mail saying I never do anything to help people you’d be right 99% of the time, but I recently donated some cash to Stand Up to Cancer and I did my good deed without a photoshoot. I mean, mainly because no one would want to take my picture, but still….