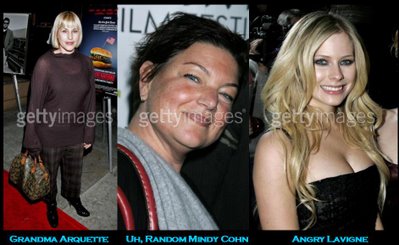 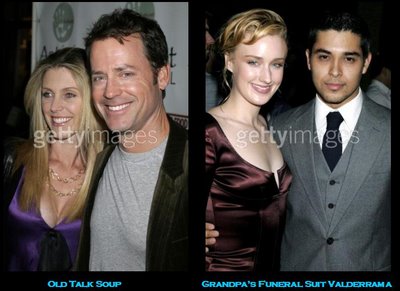 The premiere of “Fast Food Nation” drew a pretty random crowd of celebrities in Hollywood. And, that’s just how I like it….random! Perhaps my personal favorite was Mindy Cohn (Natalie) or “Fact’s of Life.” Now if only Mrs Garrett was there my day would be complete and don’t even get me going on Tootie!
Ok, well most of this random crowd happens to be in the movie, but I am still trying to figure out the Mindy Cohn connection. While the book “Fast Food Nation” has received great reviews, the movie version isn’t really living up to the hype of the book and isn’t receiving the best reviews. Now, I haven’t been to the movies since ET so I won’t have an opinion of this movie until someone tells me what I should think of it.

Here’s one lady’s review of the movie. Before you read it I must warn you, I don’t understand over 55% of what she wrote, so don’t ask me to interpret.

“But the laid-back Linklater and co-scripter Schlosser are far too gentle, eschewing ‘agiprop,’ concentrating, instead, on realistic dialogue and a deliberately unhurried approach, never pushing the unpalatable, subversive narrative with the caustic tone that a Robert Altman-helmed ensemble might take. So with many meat-safety issues still undetected, the nutritional value in question and the rampant consumption of junk food making American adolescents obese, on the Granger Movie Gauge of 1 to 10, “Fast Food Nation” is a timely, unappetizing 4 – illustrating the folly of unsavory consumption.”
Uh, what? 7 x 7 = 49?
Who Shot Mindy Cohn?!?! and What the Hell Did That Lady Say!?!