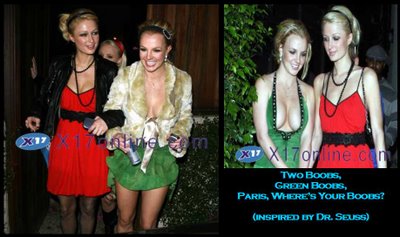 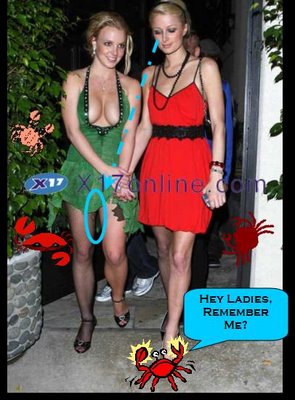 Did Britney pull a “Tom Cruise” and forget about her kids? I think she may have. They haven’t been seen in weeks. I say “full custody” to KFed. Moving on, Britney and Paris have been “buddy buddy” or as like like to call them “busty bustless” over the past few weeks. This time, over the weekend dressed like ice skating partners, Britney and Paris were in a private party (with their privates) in the Hollywood Hills. What perhaps could be the best part of all of this is how each of them are wearing just one fishnet stocking (does saying that make me 50?). Paris has one on and Britney has the other one on that is perfectly torn just inches away from her crotchy crotcherson. Good for her. Maybe she tore them “scratching” at herself due to a frequent itch and burn. I just hope that these were Britney’s and Paris took one from her because if it were the other way around I think you can get crabs that way. Yup, I just looked it up in the whore-encyclopedia and it stated that you could.
Who Shot Those Crabs!?!