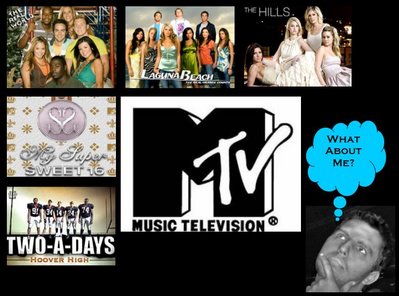 There comes a time in everyones life when they start to feel a bit older, not necessarily old….just older. For me, there isn’t anything that makes me question my age quite like MTV. I mean, first I know that I’m getting older because I am no longer of “eligible” age to try out for the Real World and with most other shows they are casting for they say you must “appear” to be between the ages of like 21-24. Again, I feel old and I’m not even. I feel ancient when I watch Laguna Beach, but like an actual major catastrophe you are forced to watch episode after episode (plus, I heart Cami).

The straw the broke the camels (toe) back for me was tuning into a rerun of the season premiere of The Real World: Denver. Seriously? It’s the same thing every season. Not only is it the same thing every season, but it always reminds me of many of my college experiences. Basically, to sum up, everyone gets completely shit-faced, hooks up, screams, yells, gets into a fight, wakes up, and does it all over again. And, this season looks to be much of the same. Yeah, I got to see that in seasons 1-12…I may be ready for a change. Or, worse yet, I may just be getting old.What I want to know is where is the programming showing the people roughly my age. Just show me some 25-29 year olds once in a while and I’d be fine. Is there really nothing going on in that age bracket? Ok so, sure you have to work a real job and stuff, but there is plenty of hijinks that me and my friends get into and usually it does involve drinking, but also some major life issues…like things that are really important. Please don’t tell me that if I want to watch that I have to tune into VH1. I’m not that old yet.

Instead of “Sweet Sixteen” how about “Shitty 27.” It could be what it’s like to celebrate your 27th b-day with your friends and feel like your world is about to come to an end because you haven’t achieved your goals yet, your still trying to save money for a house, you’re single, and no one is buying you a car….or anything for that matter. Oh wait, is that just me? Regardless, to all of you out there who are in the same boat as me one day we will live in a world where “entertaining television” does not just consist of people who are 18-24. I promise there is a market out there for the 25-29 year old. Sorry 30-year olds, there is not a market out there for you…..until I one day turn 30 and change my tune. If 60 is the new 40, couldn’t 27 at least be the new 21? I mean I’m not too good with math, but that makes sense right? How about “True Life: I am Destined to Create Programming for the 25-29 Year Olds.” Ok, so the title isn’t catchy, but it would be good, right?
Now don’t get me wrong. I LOVE me some MTV…always have, always will. I just want MTV to grow with me. See, I can be mature sometimes too. Ok, I’m off my soapbox now. Hahaha, I said “box.”