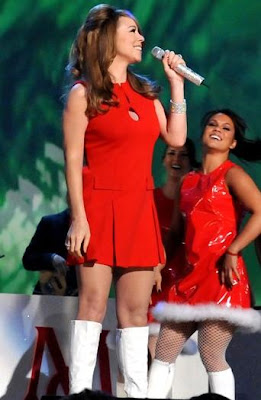 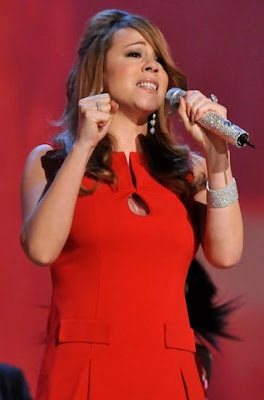 What happened to television? It seems like all that’s on anymore is reality shows and television specials. Bring back 227 for Christ sakes! Last night I thought the Grammy Awards was on. They weren’t. It was an hour long “live” special in which there were performances by randoms and then they would announce who was nominated for the Grammy Awards in question. Didn’t they used to announce these at like 8 in the morning?
At one point, Mariah Carey came out to sing a Christmas song dressed in 1960’s garb that looked like it was flammable. I’m not used to seeing Mariah dressed in something that isn’t sticking to her back-ass-boobs-vag. It was a nice change of pace, but I was left a little disappointed. Oh, and she, of course, had to toss in that high-pitched scream during her song. Yeah we get it. You can do that. We can’t. Does it need to be in every song? By the way, she missed a bunch of other notes in the song as well. I’m not a singer, but I’ve learned a lot from 5 seasons of American Idol and, well, it was a little pitchy, dog.
I officially shut off my television when, during the song, Mariah started throwing out Teddy Bears into the audience. The way she was holding and throwing them you would have thought they were covered in AIDS. Worst. Ever.
By the way, I’m pretty sure after all this Mariah wasn’t even nominated for a Grammy. Craps for her.
www.myspace.com/ImBringingBloggingBack