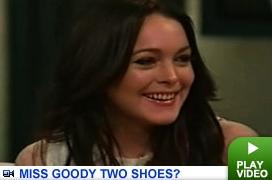 Click Here to Watch
If you were invited to “Casa de Oprah” would you sass Oprah’s ass? I wouldn’t. Well, I might if there was some type of car giveaway taking place. Lindsay No Pants was on Oprah yesterday to talk about her role in the movie “Bobby.”

When the Oprah Monster asked Lindsay No Pants if it was true that she partied at all, Lindsay responded by stating that she was 20 years old and was it a crime to go out dancing with your friends?

No Lindsay, it definitely isn’t a crime. I mean I was practicing my keg stands down the beach when I was at the ripe old age of 17. However, do you know what is a crime? It’s a crime that you are flashing your boobs and private area all over the place. That’s right, I’m talking about your old “choochola.” I mean if you’re getting out of a club at 2 in the morning and you’re hopping into a getaway car I would probably make sure to keep your legs locked up if you aren’t wearing any underpants and plan on doing “air splits.” Look, I’m not complaining but I’ve seen your chooch more times this summer (getting into a car, getting off of a boat, genuflecting at church) than I’ve seen my illegitimate bastard children who are in state custody.

Now where was I? Oh yeah, Lindsay went on to say that she was on time during the filming and blah blah blah. Oprah threw in a “oh girl” and a “uh-huh” a few times and then they rolled the credits.