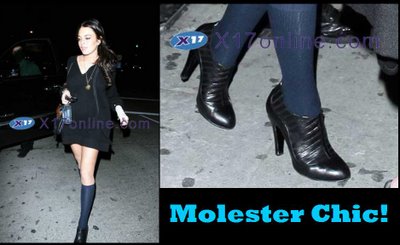 It’s official. Lindsay Lohan is in the official child molester uniform, right down to the molester socks and the diddler shoes. Ok, so the the dress isn’t too molestery, but the socks and shoes are definitely official. She looks like she should be driving a 1985 Oldsmobile and going about 5 mph around a school playground. Pervert. I know I’ve said it before, but if you have money, dress like it. I don’t care if you are running to grab a coffee at 3:45 in the morning, you should be dressed to the nines, if you’re rich. If I was loaded and had to run out and didn’t have anything good to wear I would just staple $100 dollar bills up and down my pants and shirt, just so people would know I had money. If Lindsay needs help with the staples all she has to do is let me know.

Moving on, Lindsay has recently said that she wants to be married by the time she’s 30 and also have an Oscar by then as well. It must be nice to have dreams like that. Sometimes I dream that I win $5.00 on a scratch ticket or that it won’t rain tomorrow. I guess Oprah was right when she said that we should dream big. You know what, Oprah, you’re right. I will dream big. I dream that by the time I’m 30 I get to throw eggs at Lindsay at the Oscar’s. Wow. It does feel good to dream big.

Who Shot That Diddler!?