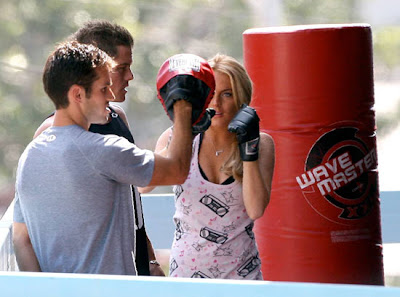 With Britney Spears on the up and up I was really pulling for Lindsay to go bat shit crazy. Sure, the whole lesbian plotline allowed for a few easy jokes, but it wasn’t quite enough. I held out for more. Well, folks, this could be it.
According to TMZ.com Lindsay No Pants was on her way to the Bowery Hotel in NYC late last night/early this morning when she supposedly tripped over a metal barricade. Lindsay’s freckles must have somehow gone to her head when she tripped because she, allegedly, thought one of the paparazzi dudes tripped her and she turned around and punched him right in the nose. Supposedly, allegedly, perhaps, could be, this isn’t my reporting, I’m just regurgitating. Don’t sue me, Dina.
Lindsay was on her phone at the time and said, “Oh my God, I just hit a paparazzi.” The 5-0 were called, but so far no charges her filed. Oh please file charges, oh please! I want to see a new Lindsay mugshot. Come on, Pop Culture Gods, I’ve been good all year. I’ve barely called little Bindi Sue Irwin an annoying douche in months! I deserve a little Lindsay crazy train. We all do.

A video of this is said to exist, which I will try and post if I can figure out how to work it. More than likely I won’t figure it out and will just show you screenshots. You’re welcome.