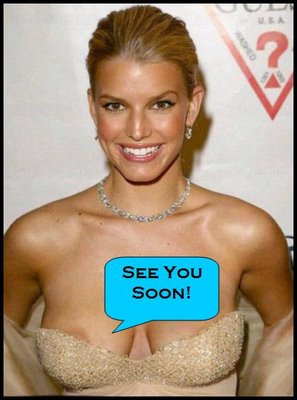 Uh-oh, it looks like the sex-tape rumor whorehouse is busting at the foundation again (I have no idea what that means)! Rumor has it that there is a Jessica Simpson sex tape floating around town in which her and Nick Lachey are screwing until the cows come home.
A random source has told a British newspaper that “Jessica is horrified her name and sex tape are being mentioned in the same sentence. She’s always been a good girl of high morals and principles.”
What’s the big deal? This tape will definitely sell more copies than the “Dukes of Hazard” sold and as long as Jessica doesn’t try to do another bad southern accent, I’m in! Allegedly, this tape is in the hands of the same people who leaked the Pam Anderson and Tommy Lee sex tape. Well the good news is that nobody saw that, right?
Good luck Jessica! This could be your best work yet!
Who Said That!?!