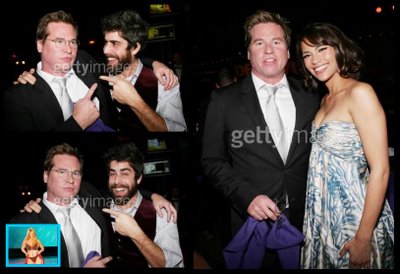 Val Kilmer totally sweats Tom Cruise and is doing his best to mimic everything about him…starting with his extra set of chins. These photos were taken last night at the after party for the movie, “De Ja Vu.” You know what Val is having “de ja vu” with right now? Gaining his “freshman 15.” He has more chins than a Chinese phonebook. Oh! Stop me if you heard this. Seriously that joke was in a joke book I had when I was little, really. Ah, the good old days when nothing was politically correct.
Anyway, what the hell happened to this guy? He totally looks like me from my freshman year of college, but right before my sister saw me with a tie on and told me it looked like my head was going to pop off. It was then that I knew that I’d had one too many beers/late night snacks. So Val, as my wise sister once said, you look like your head is going to pop off. Reign it in brother, reign it in.
No word if Val has called Jenny yet or if he plans to appear on Oprah in one year in a lime-green bedazzled speedo. If and when that day comes I will be pouring bleach into my Tivo.
Who Shot That Chin!?!