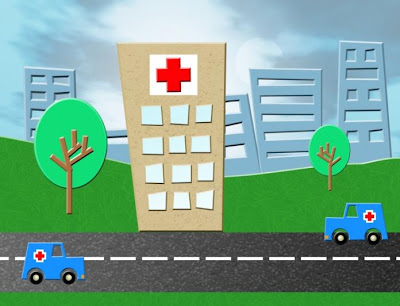 Happy Friday and welcome back to everyones favorite lazy segment called “This Time Last Year.” This Time Last Year will take a brief look at what was going on in the celebrity world…this time last year (go figure). Oh, and also I’m lazy so this is pretty easy to do on a Friday. Here’s what was going on with IBBB going to the hospital…this time last year…
So after receiving a bunch of emails about what happened to me last week, I thought I would share with you my experience in “el hospital.” So here’s what happened as I went to the emergency room last week:
Having a stomach virus is not as fun as you read about. As I walk into the emergency room I am puzzled by the abundance of police officers that are there…working. There are 5 patients in the waiting room and about 7 police officers. I ponder leaving, but the constant urge to crap myself takes over and I take a seat and wait. The waiting room is more of a “holding cell.” Everything is metal. Metal benches everywhere and not a magazine in site. I’m as good as dead. Ah, well I led a fun life. I’m ready to die at Crazy Memorial Hospital. I do wonder how long it will take them to finally see the guy sitting next to me with nails sticking out of his hand. No joke. Nails. They let him go first as I suppose the nails and blood were more important then my stomach and dehydration. I did try to figure out if they lady who was there whose head was burning because she dyed it too blond would be ahead of me. Again, no joke. She dyed her hair so blond that she burnt her scalp. Yup, she got to go first. Annnnnnnd enter the transvestite. Actually I’m not sure if it was a transvestite or transsexual. Which still has the penis? I never know the difference. He/she sat down and then sneezed. Then, he/she put on an eye patch that had sparkles on it. Again, not joking.
Everyone looked so sad in the emergency room waiting room. Like, really sad. Abnormally sad. I looked up at the wall and there was a life size Jesus on the cross and even He didn’t look as sad as the people in the waiting room…and he, too, had nails in his hand and was hanging on a cross. So they finally are ready to see me. I “enter the actual emergency room.” Holy Christ. The place was packed with people in stretchers. Surely this is not where I would be. Yeah, no, it was. I was instructed to change into “scrubs” to which I replied, yeah no I’m not really that sick, I just kinda can’t stop going to the bathroom. The nurse told me I had to and then forced me to get onto one of the stretchers and lay down. She then covered me in a blanket. I repeated that I wasn’t that sick. Didn’t matter. I was looking around the room and I can only compare it to what, in my mind, I picture an outdoor hospital in the 1800’s during a war. Like, when someone would get stabbed with a musket on the war field and they would just drag them off the war field and toss them in a cot. Yeah, that’s what it was like. P.S do you get stabbed with a musket or shot with a musket? Damn my wondering mind during 7th grade Social Studies!
The people continued to spark my interest. The guy at the end of my bed had his own special nurse who watched him as he slept. That was nice, I thought. Yeah, no, he was not allowed to be left unattended at any time because he was a “flight risk.” Great. When this guy wakes up I envision him just stabbing me over and over again. However, the guy in the bed next to him was pretty nice. He sat up and started talking to me. That was nice. I felt good that I was making a new friend. We chatted for a few minutes until we were rudely interrupted by the nurse, doctor, and two police officers that went up to his bed and were yelling that this patient had lied to them. Hmmm. What had my new friend done? Well apparently he lied about some medication that he was on and how he was a patient who escaped from some mental institution. When he asked them to just discharge him they said they couldn’t because earlier in the day he stated he was going to commit suicide when he left. Awesome. He was now “officially” on suicide watch. They forced him to take some medication to calm him down. My “new friend” (who I nicknamed “crazy” in my mind) fell asleep within about 10 minutes. Here’s where things get even more strange. They come back to wake him up an hour later to feed him fried chicken. I shit you not. Fried chicken. I was like, what!?!
Ahhhh the emergency room. What a great place to spend 5 hours hooked up to an IV and just watch the show that unfolded in front of me. From nails, to dyed blond hair, to flight risks, to suicide patients who are awaken to eat fried chicken it really was an action packed day. Luckily I am finally feeling better and would rather die alone in my apartment then go back to the ER again.
End scene.
www.myspace.com/ImBringingBloggingBack