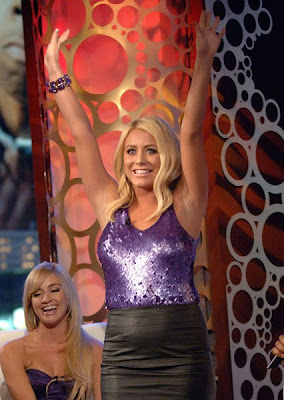 Ok so I’m a day late and two donuts short, but who in the holy hell saw the live ending of Making the Band 4? I don’t care that there’s only 6 people out there watching it and I’m two of them.
Well, if you’ve seen it you noticed that when Aubrey (aka Syphilicious) was truly kicked out of the band the audience was absolutely silent. The look on their faces was priceless. If you didn’t know better you would have thought that they were watching midgets kicking puppies and newborns in the background.
Next up, the three girls left in the group walked onto the stage as if they were pushing a casket up the aisle in church. The little one with the big hair would only look out the window during the interview like she was an orphan waiting for her real parents to come back and pick her up. The other white chick suddenly was chatting up a storm. I don’t think she said more than 4 lines the entire season.
Finally, Syphilicious made it onto the stage to tell her side of the story and she went off on this crazy tangent about how she’s a woman who speaks her mind and she’s tired of explaining that. Then she jumps up, raises her arms, and starts yelling something. I assumed that was the precise moment when the drugs kicked in.
Oh well, good riddance to her. She was annoying as all hell. The may keep saying there’s no Danity Kane without Aubrey/Syphilicious, but I say there’s no Danity Kane without the TV show. Anyone ever hear of Ashlee Simpson? Exactly.
Peace out Syph.