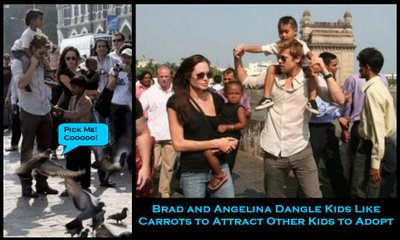 So I was tossing around the idea of either the title that I went with or “The Pitts to Adopt Everything In Sight.” It was a real tough choice. Anyway…Brad, Angelina, Maddox, Zahara, and some pigeons were just quietly strolling around India. Oh yeah, and there was a camera crew with them every two seconds. I’m sure the people of India are psyched that the “do-gooders” are in town every weekend to scope out their kids and see who else they can bring home with them. Do you think their kids miss their homeland?
So what the hell do you do in India? I’d imagine just throw rocks at each other, but I’m ignorant. The Jolie-Pitt’s toured the Taj Mahal Palace, ordered a pizza, and canceled their deep sea trip on a yacht because they decided to stay indoors. India sounds awesome! I’m totally going there for spring break. However, if I were them I would have definitely joined in on a good old-fashioned street rock fight with the locals. They just don’t know how to immerse themselves into the local culture. Snobs.
Who Said That!?!