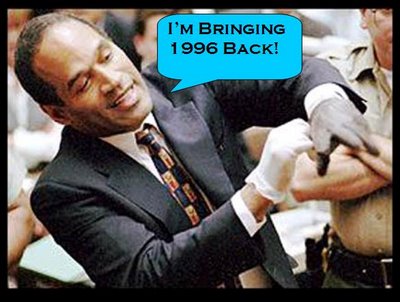 As you’ve probably already heard by now OJ Simpson is giving an interview about how he would have committed the murders if he was the one responsible for the crimes. Come on OJ, be positive. Don’t say “if” say “when”….when you killed your wife.

To no surprise, news of this interview has made relatives of the victims insane! The interview with be shown on none other than Fox later this month and just in time for sweeps week! OJ’s book is called “If I did It” Again, I think he should always say positive and title it “When I Did It.”
You know you’re totally going to watch this train-wreck of an interview. No word yet if an interview with Osama Bin Laden pinpointing his involvement in Sept. 11th will air immediately following the OJ show.