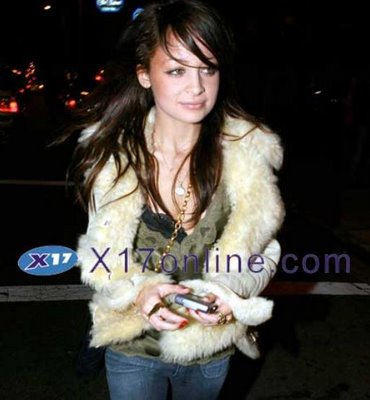 Nicole is f’ing mad as a hornet and she has gone onto her Myspace account to set the record straight! I guess Page Six was saying that Nicole had gastric bypass surgery and then had undergone an additional surgery to reverse the procedure so she could gain some weight.
Here’s what Nicole had to say on her Myspace:
“It just doesnt stop… So i gain a little bit of weight, and im accused of having a gastric bypass surgery reversed? Its pathetic of Page Six to insinuate i have done this. Anyone that knows anything about this surgery would know that legally, you must be AT LEAST 100 pounds overweight to even have the surgery done, and is a serious, life changing procedure; not one to throw around as a joke or a rumor. Ive given a statement I am in the process of putting on weight, and that should be enough. Its a shame to hear that instead of hearing supportive words, someone needs to spin it into some negative, absurd way.”
When Nicole is angry she likes to TYPE IN ALL CAPITAL LETTERS! Whatever dude, no one even knew about this story until you mentioned it on your Myspace page.