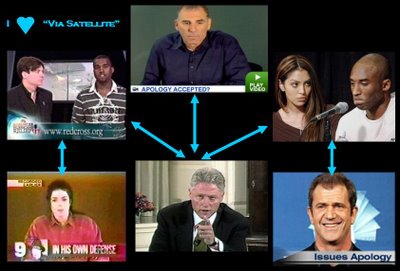 “I lost my temper on stage. I was trying to do my act and I got heckled. I took it badly and went into a rage and said some really nasty things to some Afro-Americans,” Richards tells Letterman via satellite. “I’m really busted up over this. I’m really, really sorry. “I’m concerned about the anger coming through. I’m deeply, deeply sorry. I’m not a racist, that’s what so insane about this….I just have to do personal work. I’m still reeling from this.”

I kinda know where he’s coming from. One time on this very blog someone left me a comment and told me that I sucked and that I should get off the Internet. I don’t know what happened. I went into a rage, myself, and ran out onto the street and just started beating the bag out of old women. I broke their canes, put tree sticks in their wheel-chair spokes, pulled out their dentures, stole their calcium supplements, and then pushed them onto the ground (hoping for a brittle bone break). I am deeply, deeply sorry. I don’t hate old women, that’s what was so insane about this. I guess I’m still reeling from this.

Does that make it all better? Dude, Barbara Walters lost her shiz over what Mel Gibson did and vowed never to watch any more Mel Gibson movies. If someone doesn’t say something similar about this (hint hint Oprah) I fear another LA riot….and cue Rodney King.

I know things can change with time, but for now I can never look at Kramer the same way. I may never even watch any of his shows again. Well, only because they are typically canceled after the pilot. Regardless, I’m starting to rethink my Tivo Season Pass for Seinfeld.