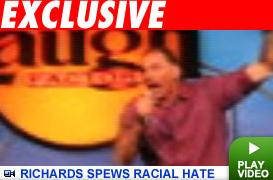 Oh snap! Right now Mel Gibson is breathing a sigh of relief right now as all the racial spotlight is on Michael Richards, Kramer from Seinfeld. Michael Richards was performing at The Laugh Factory when he experienced a little heckling. Allegedly one of the hecklers, who was African American (see how politically correct I am) said that he wasn’t funny. Then that’s when the real shit went down. As you saw in the video, Michael Richards completely lost his shit and started screaming racial slurs at the gentleman. Seriously it was horrific. Completely awkward. It seem like a first the crowd was laughing a bit, probably thinking it was part of the show, and then they soon realized that he totally lost his mind. This went on for over 2-minutes and was all caught on tape.

While at this point Michael Richards still has not released a comment, but Jerry Seinfeld did. Jerry said, “I am sick over this. I’m sure Michael i sick over this horrible, horrible mistake. It is so extremely offensive. I feel terrible for all the people who have been hurt.”

Good luck getting out of this one!