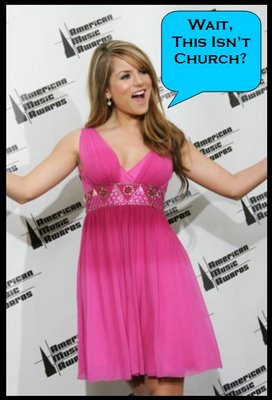 I had reported last month with my award winning journalism that singer JoJo was spotted at Hyde (a club/bar) in LA. Being that little JoJo is only 15 years old it was odd that she would be at a bar in which you must be 21 to enter. I know, the horror. Anyway, Multiple Persons Magazine followed up with JoJo about a month later at the American Music Awards and has asked her what that was all about.
Basically, JoJo said that she was an f’n retard, but let me show you what she specifically stated:
“I didn’t know it was 21 and over….it’s a freakin’ restaurant and I was there with my mom and two other underage friends. I had milk and cookies…..[but] it was great!”
Oh JoJo, way to throw your mother and two underage friends under the bus. I’m calling DSS and having them take you out of your house since your mom forces you to go to bars. And, “whatever” that you didn’t know it was 21 and over. I sometimes make that mistake as I walk into a “bar” and am there all night and then am like, “wait a minute this isn’t a bar at all…it’s a nursing home!” It happens to me all the time. I mean, even though there are old women in wheelchairs, under blankets, being fed applesauce does not mean that I’m just “suppose” to know that it isn’t a bar. Besides, I get way lucky at a nursing home. I do well with old women. Hmm, I miss them.
Anyway, watch your step there J. Jo because it won’t be long before you end up just like Lindsay Lohan….an unwed mother! Oh wait, that isn’t true? Oh well, you get the point. P.S Next time you say “freakin'” in an interview I’m going to wash your mouth our with sour milk. Good day.
Who Said Milk and Cookies!?!