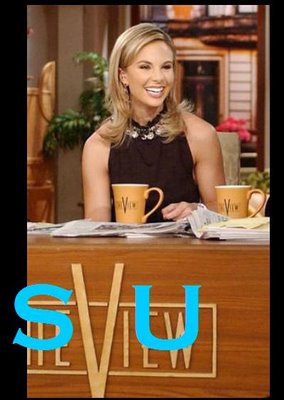 Oh Elisabeth Hasselbeck, from The View, is using her angry words lately! Recently in an episode of Law & Order: SVU they had someone named “Elisabeth Hassenback” raped and killed. Coincidentally, this character was also a 3o-year old woman from NYC. The real Elisabeth Hasselbeck was, of course, really freaked out by this and called one of the producers of SVU to let him know that it was socially irresponsible to do such a thing. To which this producer told her it was a coincidence that their names were so closely related, apologized, said “goodbye lady” and then hung up the phone. Nice! So she’s all bent out of shape now and saying that she can’t sit next to any of the cast of SVU, etc.
If we’ve learned anything from this it’s that it was a big mistake. Clearly, they decided to focus on the wrong “View” cast member. They could have killed off “Star Janes” or even “Barbara Valters” or hell even “Rosie O’Donald.” Why did they have to pick the prettiest one?!
Who Said What?!