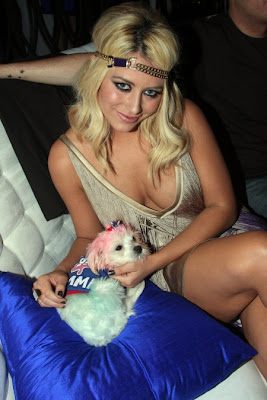 If you’re one of the 14 people who watch Making the Band 4 and you flipped back and forth between the Presidential Debate and Making the Band you would have noticed that Diddy booted Syphilicious from Danity Kane. Now, he basically booted her for sassin’, but think it has more to do with her being a white-trash skank.
Now, what I didn’t know was that the other chick in the group, Aundrea, had emailed Diddy a while back saying that she wanted out of the group. Supposedly she and Syphilicious don’t talk for weeks at a time. Then Dawn broke it down for everyone saying that the girls don’t trust each other and once their show is over they all go their separate ways and don’t talk for weeks.
I don’t want to fall into the reality show trap, but could this be the most real that any reality show has ever been? I feel like we haven’t seen something real in reality for so long that I’m not really quite sure what to make of it.
We’ll see how this all ends next week when Diddy and Danity Kane are at the TRL Studios in NYC for a live season finale. Hopefully they really did give Syph the boot for good. Let her try to get out there and make it on her own. She seems to be best buds with Jenna Jameson, so perhaps we’ll see her in porn soon. Fingers crossed.