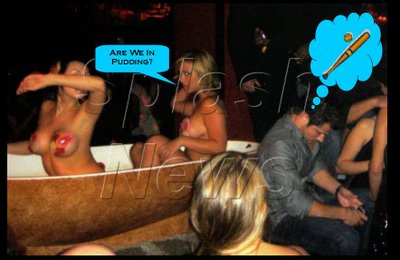 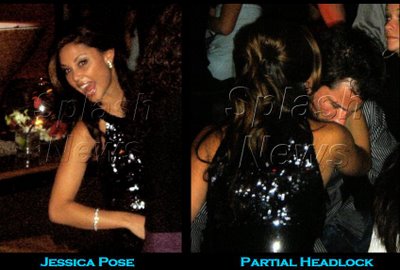 I love a birthday party with nearly naked women in a coconut pudding bath. It really brings back memories of my 5th birthday. Nick Lachey had a little fiesta for his girlfriend Vanessa Minnillo at Tao in Vegas (baby!). According to random reports after the two chicks in the tub were trying to get Nick’s attention he and Vanessa got into a pretty deep discussion. About what? Who knows. Perhaps gas prices. By the way, is Nick dead in that picture? Someone should check on him. There’s a good chance he is either dead or passed out. However, I will not pass judgement as I have been passed out against a wall…standing up…in my day too.
Truth be told it just looks like Nick is looking at his phone. Hopefully there are some naked chicks on his phone and that’s why he’s not paying attention to the naked chicks behind him.
Happy 26th birthday Vanessa. If you get to be 26 and on MTV then I should get to be too. Throw in a good word for me, no?
Who Shot That Party!?!