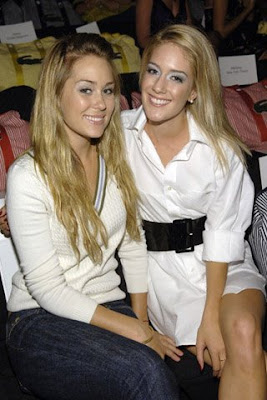 Check Out Past Hills Recaps Here!
If you don’t want to know if Lauren and Heidi and her new chin, new nose, new boobs, and new lips are friends again don’t continue reading. IBBB could just be tricking you. Perhaps Lauren is only friends with Heidi’s new lips and not Heidi herself. Spoiler alert may be ahead….and it may not be ahead.

According to Us Weekly, who seems to blow The Hills on a daily basis, they are reporting today that Lauren and Heidi may have reconciled and become friends again. You see, Lauren was at STK restaurant in LA last night celebrating her runway show with family and friends for LA fashion week. At the same time, through the absolute grace of Jesus Claus and Santa Christ Heidi and Steve Sanders were at STK too. Imagine the likelihood of that?!

Heidi spotted Lauren (she probably noticed all the lines under Lauren’s eyes as a way to identify her) and asked someone if she could congratulate Lauren on her tacky clothing line.

Lauren and Heidi (and her chin) then had a brief heart-to-heart and then were seen hugging. Personally, I think it was just Lauren’s attempt to try and pop Heidi’s new boobs, but that’s just my theory.

Looks like that very well-written letter by Heidi may have paid off!