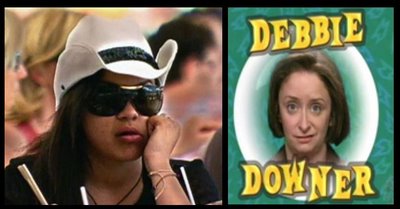 Yeah! 1 hour of Laguna Beach kills 25% of my braincells. It’s prom season for the gang of Laguna Beach, which means that all the guys must find new and inventive ways to ask the girls to the prom. Let’s see we have:

Clearly these jackasses must have got confused and thought they were asking these girls to be their wives. Seriously, I’ve seen less intense marriage proposals. I mean, when I asked my prom date to go with me I just called her and asked her…and then told her she was pregnant. I really like to pack a two-for-one deal with these things.

Oh, did I mention the episode started with Tessa and Rocky rocking the ballet outfit cameltoe? Yup, it’s true. Do they still offer ballet classes to girls who are 17? Did they get kicked out of the “Brownies?” I literally cringed with embarrassment when I watched them dance.

Anyway, Rocky and Alex are quasi back together and are heading to the prom, which means that Rocky is going to need to add some extra white-trash extensions to her fright-wig that she’s rockin’. At one point it literally looked like Rocky had two wigs on…one wig on top of another wig. She doubled up on her wigs.

So the prom lasted about 15 seconds and then it was onto the after party. Rocky freaks out, cries, talks about being a princess and end scene.

Episode 2 is all about Chase’s band. Oh and Lexi’s dad takes the girls out on his boat, which includes Breanna (Mask), Lexi, some other randoms, and Cami. Yup, Cami. I literally did a double take because I couldn’t figure out why she was there. Maybe they were going to use her as an anchor. No one can know for sure. Later Cami and Kyndra hop in the Range Rover and head to LA to watch the band at the Roxy, but not before Cami sings “Barbi Girl” with (yes you guessed it) her boobs hanging out.

So the whole gang makes it to The Roxy to see the band play…well Tessa missed most of it because she had Derek’s tongue down her throat. I hope he doesn’t catch the allergy that put her in the hospital! Later the band gets signed to Epic Records. Seriously? Weren’t they just singing at Tessa’s birthday party? Damn it, maybe if I sang at her birthday party I would be signed to Epic Records. Oh wait, I can’t sing. Do you think Epic signs blogs? Yeah, I didn’t think so. So when the guys started telling people that they got signed to the record deal no one seemed excited at all. Everyone was like, oh that’s great. I would bottle my friends if they weren’t more excited for me.