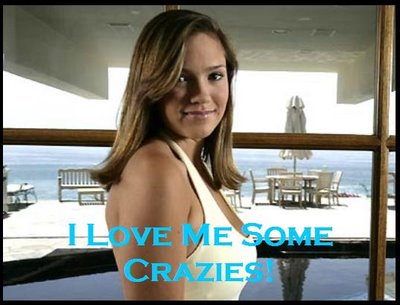 Thank God for Jessica! Seriously, she is a carbon-copy of last season. She picks random fights with Cameron. She is literally fighting with girl 2 years younger than her. She is crazy. I love her.

Meanwhile, Tessa finally gets to go out on a date and isn’t forced to stay shackled up at Rocky’s house baking cookies (like on every episode). Who is Tessa going out with, you ask? I think it literally was Larry Bird without the mustache. No joke. Go run to your Tivo’s and watch it again. Her date was Larry Bird. Date aside, the big news that we’ve all been waiting for was revealed. The question that has been looming all season. Why was Tessa in the hospital and what sickness did she have? Da-da-dunnnn! Uh, yeah. She had an allergic reaction and was in the hospital for 3-weeks. Yeah, that really was it. One time I had an allergic reaction to a bee sting and, uh, my arm hurt….for like 20 minutes. That’s it. What the hell are you that allergic to that forces you in the hospital for 3 weeks? Weeks! Maybe she’s reallllllly allergic to condoms?

Back to poor crazy Jessica. She is getting her ass dumped in the park. Seriously, stop being so insane and you won’t get dumped every Monday, Wednesday, and Friday. The both break up with smirks on their faces. Assholes.

So now its time for every one’s favorite part, “What I’ve Learned.”

~Cami is the said the most intelligent statement all season. Cami said she likes baggy clothes because she’s getting “hefty” these days. This is the first time I agree with anything that Cami has said.

~Cami spent almost $4500 on clothes to compensate for low self esteem.

~Rocky walks with her shoulders up at all times and talks to everyone like they’re 2 years old.

~These people have BBQ’s to go to everyday I think.
~Rocky gives horrible words of wisdom that should be on a calendar that has cats on it and little dogs in teacups.