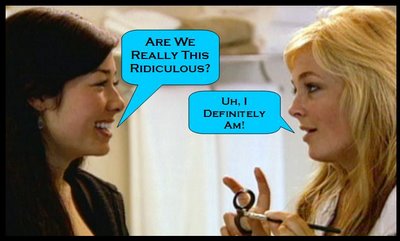 As always, I must start this post by saying that I’m getting too old for this crap. However, like a choreographed train-wreck, I must watch. Seriously, Laguna Beach is completely bizzaro world. Cameron and crew are playing bocci ball on the beach. Yup, on it. In the sand. Really? Yeah really. Rocky’s ex and his buddy are at the driving range and decided to stop in the middle of it to call Lexi and her friends to ask them to the concert. And, cue Rocky’s ex (whose name I can never remember) take a swing at the ball and completely let go of the club. If I was there and after seeing them on their cell phones I would have run out, grabbed the club, and hit him over the head with it. Complete tool.

Moving on. The producers of Laguna Beach must have given everyone some bonus money if they could continually do two things: (1) Say the word “bonfire” and (2) constantly analyze the events of the bonfire. Literally, every two seconds Rocky, Tessa, and Chase would talk about being at the bonfire and their boyfriends not talking to them at the bonfire and having it be awkward at the bonfire and wanting to leave the bonfire. I’m like, girls stop saying freakin’ “bonfire.”
Tessa struggles with her boyfriend as he hasn’t talked to her in like 3 days, but she’s going to give him another three days to see if he ends up talking to her. She’s an ass. I hope she gets another allergic reaction.

Now, cue the concert. The whole deranged gang is heading out to a concert. Rocky is dressed like she’s going to the prom. Everyone else is wearing t-shirts. I think the concert is at a bar. Well, more like a barn that has a bar. Perhaps the best part of the concert is that Cami was there. I miss her. She was wearing red just like the actual Kool-Aid guy. Very appropriate. I like it when Cami makes a cameo, or as I like to call it a “cami-yo.”

Even Breanna made an appearance. I believe she had about 14 seconds of air-time. Good for her. That’s 10 seconds more than normal. Ok, but back to Rocky. When Rocky hears her ex-boyfriend call her a slut, her reaction is priceless. You would actually think that someone gave Rocky the news that her parents were dead. She covers her mouth, grabs her chest, and has to crouch down on the ground. PRICELESS.

In conclusion, Tessa calls her boyfriend for “the talk.” She heads over there, as he waits in the street for her and what do they talk about? Yup, the “bonfire.” Her boyfriends decides to just be “friends.” Oh well, poor Tessa. Now I feel bad that I wished an allergic reaction on her. I’ll be in hell if you need me.