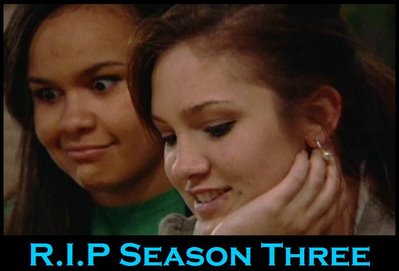 R.I.P Season 3, R.I.P.
It’s graduation day for some of the kids of Laguna Beach and you know what that means! There are only a few more times that Cami can show her boobs. How sad. In the first 10 minutes alone Cami’s boobs were falling out of her tennis shirt. Later at graduation, Cami had on this “shirt” that basically just covered the lowest part of her boobs (just directly above her waist). Oh Cami, I can’t wait for next season when you graduate and you can put your tassel somewhere else besides your cap.
Graduation also consisted of Cameron and Kyndra getting into a fight about “standing up” and “cheering” for the graduates. Yeah, no that’s really what they were fighting about. I almost forgot to say my obligatory, “I’m getting too old for this shit.”
Next up, Cameron has a “beginning of summer” bbq that even included a slideshow. Really? Who does that? Kyndra fake cried and even more shocking was the Cami’s boobs actually were inside her shirt. Maybe they were sick?
Later, Breanna wrote Rocky a love letter basically blaming herself for the fall out of their friendship. Breanna basically begs for her friendship back. I hope Rocky says no. Breanna is boring and she looks like Mask. But, Rocky doesn’t take my advice and she goes to Breanna’s mansion. Then, it gets awkward. I wonder if Breanna wants to make up so she can get some more camera time next season. I would if I were her. Breanna is a girl genius!
Uh, yeah and Tessa didn’t take the news to well that Rocky and Breanna were becoming friends again. Rocky totally traded down.
Breaking news: Cameron and Jessica go to the beach and feeling “glum” Cameron asks if Jessica ever thinks she would turn into his girlfriend. Typically Jessica would be all dysfunctional and throw herself at him and then yell at him, but this time she said “no.” She didn’t think she would ever be his girlfriend. I think, I think that may be a sign of the end of the world.
In conclusion, Alex gave Rocky a ring that kinda looked like a cross between a seahorse and a lady bug. I have to be honest, I threw up a little in my mouth.
And so ends another season of Laguna Beach. I am dumber because of it. Thanks MTV.