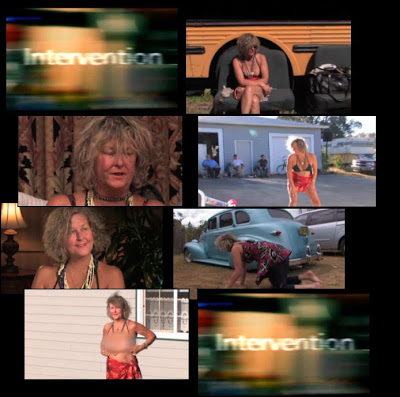 My name is Patrick. P-A-T-R-I-C-K.
[Patrick is the writer/owner of ImBringingBloggingBack and while he agreed to create IBBB, he does not know he’s about to face an intervention].

Seriously, I heart Intervention big time. One would say I am addicted to it. That “one” is actually me. Look, I don’t think that the people who take part in this show are anything to laugh at. Addiction is a big deal and should not be taken lightly, under any circumstances. However, every once in a while one slips through the cracks and I catch myself sitting and watching all with a big old grin on my face. The last time this happened to me was when I saw the episode with that lady Janet, who we immediately learn references herself as “I’ve always been a lady of leisure.” Seriously, next to “It’s like I’m walking on sunshine” (from the Alison from Intervention episode), this is my next favorite Intervention quote….ever.

[ Update ] 2-months later Janet is doing great and, like almost all the other people on Intervention who go to rehab, she’s dyed her hair blond. Oh, and Janet no longer dates Bud. Poor Bud.

P.S –> Other great quotes from this episode include:

“I’ve always been a lady of leisure for 30 freakin years, man!”

“I should’ve known it was entrapment!”

More You’ll Love:
All the Gifts You Can Get the Janet in Your Life
Find the Right Gift for Janet’s Boyfriend, Bud
Everything to Stuff Inside Janet’s Christmas Stocking
Sadly, No Janet Halloween Costumes Exist Here, But They Should!