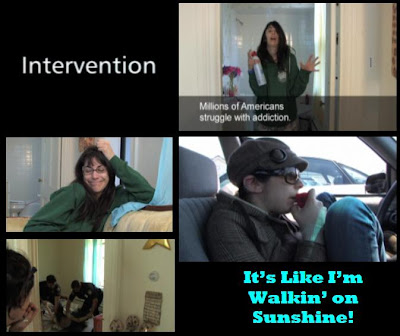 Ok. So I need to start out by saying that I know that I’m going to burn in hell for making fun of the girl from Intervention. I know I am. I’m at peace with it. I know it’s wrong. I know it’s horrible. I know it’s low morals. I know it’s extremely bad karma. But, have you guys seem the latest episode of A&E’s Intervention? Seriously. Best. One. Yet. You totally knew it was going to be good when they’re showing you the preview of the episode and the chick screams into the camera, “It’s Like I’m Walking On Sunshine!” Honestly, watching Intervention makes me feel like I’m walking on sunshine.
So this chick Allison is a premed student, insanely smart, (has odd eyebrows) and is crazy addicted to inhaling those cans that you use to clean your computer. You know, you buy them at Office Max? Yeah, those. Here’s the thing. In order to be addicted to inhaling these cans you have to be all sorts of committed. The buzz only lasts 3-5 minutes so you have to constantly inhale these cans all day long. Let me repeat that. All day long. Allison literally buys 10 cans of this shit a day and inhales it every 3 to 5 minutes. I don’t have the dedication to get addicted to this shit.
Ok so here’s the other thing about Intervention. And I know this is horrible, but when they get to the part where they show the first baby picture of the addict you know, you know, they were molested. No joke. It’s like cue the baby pictures and…..BAM molested! Every time. Clearly this chick was molested and, not only has an eating disorder, but also cuts herself to try to cope. When she’s not inhaling computer cleaner and screaming on the floor she’s cutting. It’s a full time job.
Oh, and she’s been married like 3 times already. She meets a guy, they go out for 2 months and then get married. Then the guy divorces her because she can’t put down the can. For some reason while talking about her marriages they kept on showing her playing the flute while in college. I’m not sure what the flute has to do with it. Wait, maybe because the flute was in her mouth then years later it was the computer cans? Can playing the flute cause addiction? Oh and it gets better. She has this “sugar daddy” who takes care of her financially, but he’s married and has two kids. While I thought that was bad enough I cringed and giggled like a school girl every time her family would refer to him as the “sugar daddy.” I was like, stop saying sugar daddy!
Ok, so then they cut to the intervention itself. But here’s the deal. Intervention is on from 9-10pm. The intervention part of the show usually airs around 9:40-9:45 leaving like 15 minutes for the intervention itself and the follow up. Not this time. Not. This. Time. BAM! The intervention starts at 9:30, so you totally know this is not going to go well if there’s like 30 minutes left. Yeah, it doesn’t go well. Allison bails from the intervention, which I believe is a first, so then the following happens. They randomly all Animal Control to come and take her cats away. And then the mother calls the “sugar daddy” to tell him that if he keeps talking to Allison she’s going to tell his wife. Seriously, what!?

Allison goes back to the red barn she lives in and when Animal Control comes to take her cats she pitches a fit and then the police take her into custody. Ok so it’s not that funny, but it kind of is. The cops tackle her and one grabs her arm and the other grab her legs and they’re swinging her like a jump rope. No joke I was waiting for someone to start doing double-dutch over her.

So she goes to jail, is released after 7 hours, and then finally decides to go to rehab after her family cut her off. The good news is that she’s been sober since May 2008. The bad news is that she dyed her hair this crack-head blond color while in rehab and looks worse. Oh, and she still talks to the “sugar daddy.” Yeah, that’s going nowhere fast.

Honestly, this was one of the best Interventions ever. I love watching the reality shows on A&E. It makes me feel smart. Like I’m watching smart television.