Feliz Harriet Carter Miércoles. That may or may not mean Happy Harriet Carter Wednesday in French, Spanish, or Morse Code. One can’t be sure. This week we look at a Harriet Carter review from over 365 days ago. That’s one year. Are the IBBB readers getting sick of Harriet? I feel like it’s getting a little ho-hum. I’m also not sure what that means, so I’m on “relationship vacation” from Harriet this week. Here’s a Harriet blast from the past…..enjoy. 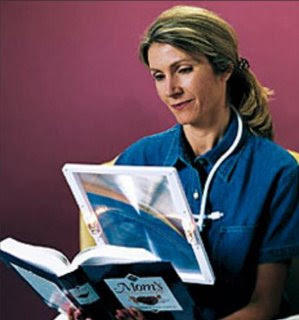 Product # 1 – You know what’s really heavy? Eyeglasses. You know what’s light as a feather? A jumbo magnifying glass that hangs from your neck and is the size of a bathroom window. Really? This makes it easier for you to read then just putting on a pair of eyeglasses? No joke, that’s my computer screen hanging from this skanks neck. My thoughts? If your eyesight gets this bad just go for an eye transplant. I’m sure Harriet sells an “eye transplant” contraption. Perhaps just go for those “books on tape” because you look a little ridiculous. I mean, I’m not sure if a book called “Mom’s” will be on audio tape, but it’s worth a shot. If all else fails you should literally try playing the piano and/or harmonica. What? It worked for both Stevie Wonder and Ray Charles. You never know. I’d try it. P.S, nice purple wall. Do they film 80’s porn in that room when you’re not sitting there? Thanks Harriet for being a literal pain in the neck. Sidenote, that was the cleanest joke I ever told and, perhaps, the worst. 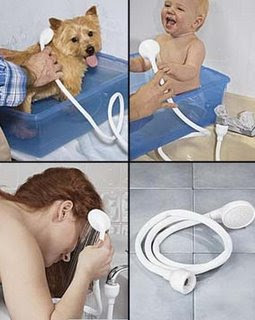 Product # 2 – Hey Disgusting! How are you? Are you kidding me with this. THIS is exactly what I’m talking about when I say that dogs are gross and their owners just don’t see it. I don’t care what you say, it’s true. This “lady” is washing her filthy dog that licks other dogs bums (haha dog bums), drinks out of the toilet, and eats its own puke right in the sink. Then, it’s time to wash the baby….in the same tub. Mmmmm clean and sanitary. My favorite! But the fun and disgust doesn’t stop just there. Next up this lady apparently gets naked and then washes her hair over the sink because, clearly, walking her fat ass to the shower is too much work. Although it looks like she’s missing her hair and is just washing her eye. Maybe she got dog shit or baby piss in it. It’s a tough call, really. She probably is also washing the fleas off that baby. Actually, that baby looks like it has rabies. Is that how you get rabies? Probably. Anyway, thanks Harriet and best wishes to this lady not having her kid ripped out of her home by DSS because I’m absolutely calling them. Gross. 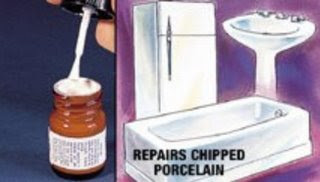 Product # 3 – Uh-oh! Is your porcelain chipping? Who gives an F. The real issue is why in the hell is your refrigerator in the bathroom? Actually, another important question is who in the sexy hell has a porcelain refrigerator? Do they even make those anymore? And by “anymore” I really mean “since 1925.” This does bring up an innovative idea. Sometimes when I get out of the shower I would love some breakfast but then I have to walk alllllll the way to the kitchen. That’s not efficient at all. Instead, I’d love to be in the shower and just reach into the refrigerator and grab some milk for my cereal (I’ll keep the box of cereal under the sink). Also, how small is the bottle? It seems like it’ll take about 300 hours to fix that bathtub. It’s kinda like painting your car with a bottle of White-Out. Stop. I just thought of the last time I saw a porcelain refrigerator. Remember that episode of Punky Brewster when Cheri got trapped in the refrigerator? Yeah, then. 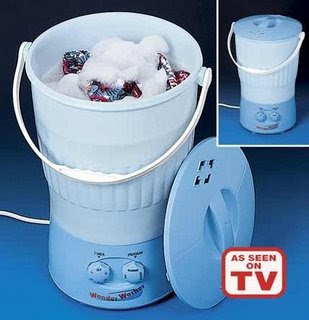 Product # 4 – Looking to wash your underwear in your blender? Well you’re in luck! Now you can wash your clothes in something the size of your blender. If you only own 2 articles of clothing then this is the product for you. Perfect for the homeless or a family of dwarfs, you’ll be washing clothes in simply hours! What the hell are they washing in this thing in the photo? Are those crushed Coke cans? Totally, they are. They’re 100% washing Coke cans. But why? Why would one need to wash Coke cans? Pepsi cans, sure, but Coke cans? I don’t buy it. Anyway, when you’re done washing the skid marks out of your crap stained underpants, you can also make a killer margarita in this contraption. Tasty! Ole!