Happy Harriet Carter Wednesday! Today boys, girls, boys with girl parts, and girls with boy parts do I have a treat for you! I figured since the Harriet Carter Crapalog is a little thin on white-trash products this week I’d come up with a Best of Failure Model Chick: Volume 1. Looking back at the past 2 years of Harriet Carter write-ups I noticed that at the beginning I would tee off on good old Failure Model Chick and hadn’t even named her yet. I mean, what a real treat for me. It’s like looking at my baby book, but instead of a baby book it’s more of a “stuff I wrote that is likely to send me to hell” book. Anyway, FMC catches a lot of crap around here at the IBBB headquarters so I thought it would be fitting to create an entire post dedicated to her. Ode to FMC! Oh, and pay no attention to the numbering. I failed math. Let’s go! 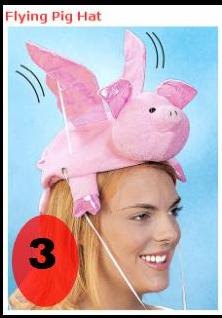 Product # 1 – You should know by now how badly I want to model for the Harriet Carter catalog. No joke, it would be a dream of mine. Look at this chick with the pig hat on her head. Yes, pig hat. Seriously, what? Why would you ever need to wear that? You wouldn’t. Not even for a Halloween costume. When you pull the strings the wings flap and then guess what? Pigs fly. Very funny Harriet. I love it when you state the obvious. They should have a hat in the shape of a horses ass that only Harriet is allowed to wear. Oh, and the look on this girls face is priceless. First off, she has “man face” but second of all you know she’s thinking, “I quit school and moved to LA to become a model and I’m wearing a pig on my head.” Yeah you are sweetie! Now go call you parents and tell them how you got your big break! Just think, this could be the biggest thing you ever do. Wearing a pig hat. Pig. Hat. I’ll help you write the suicide note. 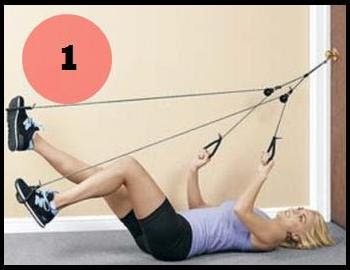 Photo # 2 – It’s a new year and you probably want to get in shape, right? Of course! But, does the gym seem like too much work? Have you ever hoped that you could get into tip-top physical shape by just using your doorknob and some string? Well, guess who’s in luck?? You! That’s right, now you can shed a ton of pounds by hooking up this, what I can only assume is a marionette contraption, to your bedroom door. I know! Once this string workout system is set up just lay on the ground and kick and punch and push and pull like nobodies business! Make sure you wear your spandex shorts too because when you pull the door right off its friggin’ hinges and it comes crashing down on you, you’re going to want to look your best for the paramedics. Once you outgrow this technologically advanced “fitness machine” you should totally try out the newer workout system from Harriet Carter that consists of an elastic, your car, two steak knives, a glass of wine, your coffee table, and (of course) your spandex. It’s basically like “do-it-yourself” gastric bypass surgery at home! 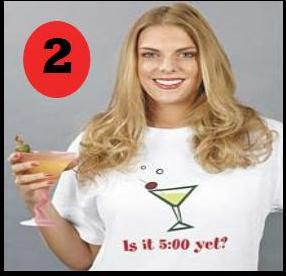 Product # 3 – Woo-hoo! Look who’s back! It’s “failure model chick!” You may remember her from older Harriet Carter products such as, “trapped in the car and need to break free,” and also, “ouch I have back pain and need lightning bolts to straighten me out.” Oh, and who could forget my personal favorite, “wearing a pig hat on my head.” Yup, “failure model chick” is back and this time she is the life of the party with a little drinking problem. Now you too can sport the good old fashioned “Is it 5:00 Yet?” t-shirt. Lucky you. Look how hysterical that shirt is. Do you get the joke? Let me explain it to you. You see, this t-shirt is supposed to let people know that you’ve had such a hectic day that you are ready to get your drink on. Funny, right? Yeah, didn’t think so. Not only is “failure model chick” wearing the shirt with the martini glass on it, but look….she’s also holding a martini. “Failure model chick” is so funny. I suspect she is about 3 more martini’s away from taking a permanent dirt nap. Good luck “failure model chick.” We’ll miss you. Now go into the light. 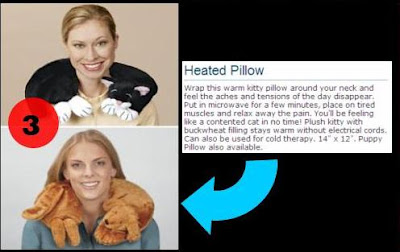 Product # 4 – A moment of silence please…….”Failure Model Chick” is back! This time around she is sporting a plush dog around her neck that can be heated up in the microwave. I shit you not. Brrrr it’s cold. I wish I had a cooked dog around my neck. Viola! Now you can! And you know that “Failure Model Chick” was all “I’m not putting a stupid cat around my neck for this picture…I’m a successful catalog/crapalog model.” “Failure Model Chick” must be quite the diva on the set. As a side note, let’s just say it…how much of a douche bag does the model in the picture above look like? Also, besides just teeing off on “Failure Model Chick” and crew, why does one need a heated animal around their neck to keep warm? I have an idea…turn the heat on. Nothing will confuse a child more than watching “Mommy” putting a dog in the microwave. Watch out Sparky, you’re next! 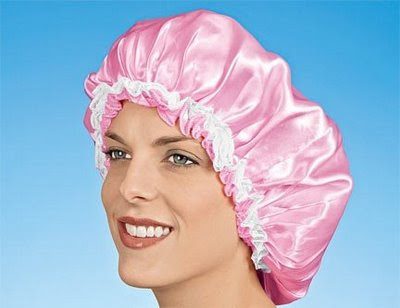 Product # 5 – Trying to get out of having to “make sex” with your partner this Valentine’s Day? Well try no longer because just by simply strapping on this “Sexless Sleep Bonnet” you won’t have to come up with excuses any longer! The Sexless Sleep Bonnet comes in the delicate color of pink and will more than likely go up in flames on a hot summer night when a light breeze sweeps across the room. It also looks like it stinks and itches. This Sexless Sleep Bonnet can also work in your favor other ways as well. Want to look your best for that late night booty call and don’t want to show up at your “callers” house at 3am with bedhead? Well it looks like Failure Model Chick is going to look fresh as a daisy when she gets her call. She even goes to bed with a face full of makeup on. Sexy! Happy V-day Failure Model Chick! If Harriet won’t be my Valentine, you certainly are in a very distant second. 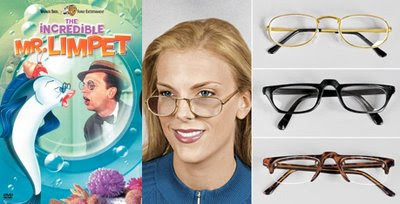 Product # 6 – Oh no you didn’t. Oh no you just did not! You did NOT just bring Failure Model Chick back into the Harriet Carter catalog and make her model old man eye glasses!? This, perhaps, is the best day of my life. Where to begin? Well, first and foremost she is absolutely doing her best “Don Knotts from The Incredible Mr Limpet” impersonation and she has it down to a science. As a sidenote, looking at Failure Model Chick in these molester prisoner eyeglasses makes me “Mr. Limpet” if you know what I mean…and I think ya do….because I’m 12…and a pervert. No joke, I think her lips are photoshopped in and I’m pretty certain that half of her has been animated. Don’t get me wrong I’d love to watch a full feature Failure Model Chick cartoon, but this is a little too much. And why the hell isn’t she looking through the eye glasses. They’re not bifocals, right? Seriously she looks like an 85 yr old man who’s going thin on top. That’s a pretty sweater too. Very youthful. What could she be thinking when they’re shooting her? I assume she’s praying that bullets come flying out of the camera instead of flashes. As a sidenote, 2 Minute Chef hasn’t had any new crapisodes in a while. I hope she’s not out of work. Eh, maybe she’ll turn to porn. Thanks Harriet for making this Wednesday a little extra special for me!