Happy Harriet Carter Wednesday! This is the first HCW in 2009. This means I am officially 2 years down without a Harriet Carter lawsuit or a restraining order from Failure Model Chick. There’s a lot to be thankful for. This week, Harriet feeds your children animal poop, dressed up your local pedophile, and continues her obsession with horses. Let’s go! 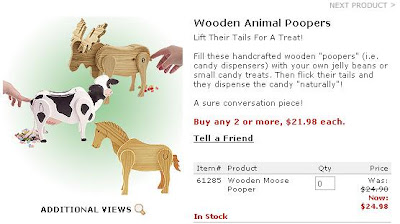 Product # 1 – Hey kids! Come downstairs and get yourself a handful of animal shit! Don’t bother washing them, just stick out your hand and let this little wooden moose drop a stink attack on your palms. Don’t even bother filling these animals with candy. Hell no! Simply dunk them in your toilet and fill them up with your own “homemade candy” and dispense them to your whiny kids. For some extra fun, feel free to fill these animals with actual candy and then later take them to the zoo and tell them that there really is candy in the horse that he’s petting. You’ll all be squealing with delight when Junior pulls the horses tail and animal feces comes pouring out instead of some colorful Nerds. Be sure to bring a camera because you’ll want to blow up these memories and hang them over the fireplace. Seriously, whatever happened to a good old fashion Pez dispenser? Those were simpler times. I only eat my candy out of a moose’s head and not his bum bum. Poop. 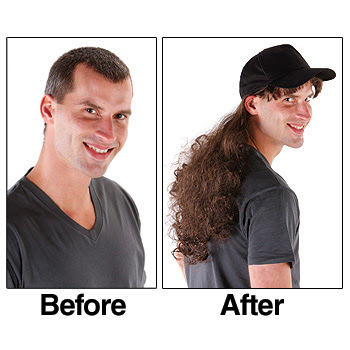 Product # 2 – Are you a Level 3 Sex Offender who is so tired of just blending into the background? Wanna be able to cause absolute terror and mayhem, but just don’t feel like you have your creepy look down to a science yet? Well buckle up, my diddling friends, because Harriet will have you looking like you’re about to diddle just about everyone and everything in sight with this snazzy hat and long ratty, curly, smelly, wig. Thank God they had clearly labeled these as “before” and “after” because I would have had no way of knowing just what they were selling….or even what the difference was!? No joke, this dude doesn’t even need to say anything. You can totally read it on his face that he’s thinking, “Get in the car kids! Wanna pet my puppy?” Run kids. Run. Imagine seeing this creepo answering the door when your kids ring his doorbell on Halloween? Honestly, what do you do if you’re asked to model this for a catalog? I mean, I’d model a wig like that that’s made for your “Mr. Winky Claus” but I have no standards. Ok, that’ll be all. 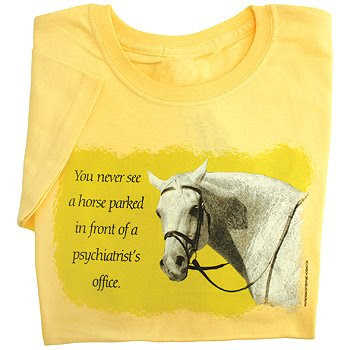 Product # 3 – Do people really like horses this much? I can understand loving animals….actually I can’t since I hate all animals….but isn’t this taking things a little overboard? What exactly do they mean when they say “You never see a horse parked in front of a psychiatrist’s office.” Huh? Of course you don’t. What’s your point? You also don’t see a horse parked in front of a school, at the movies, in a supermarket, at church, filing his taxes, or at your local IKEA. Does that mean those places are bad to go to as well? I’m confused. If I could create a horse t-shirt it would say something sweet like, “Horses. They never met a hymen they couldn’t break.” That’s nice, right? I like it. I’m going to start making those t-shirts STAT!