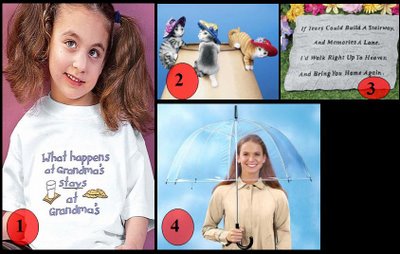 Wow, the day before Thanksgiving already! What better way to celebrate the day before than to have yourself a slice of Harriet Carter. Let’s see what she has to sell to us this time.

Photo # 1 – Where to begin, where to begin? There’s so much, really. First off, let’s go with the t-shirt well before we even begin to comment on this little girl. “What happens at Grandma’s Stays at Grandma’s.” Um, yeah. Is Grandma in Cancun on spring break, because that’s the only time I’ve ever really heard that expression used. What does happen at grandma’s? Is this girl getting abused by grandma and the t-shirt is just a friendly little reminder to keep her mouth shut? If so, I say “run little girl, run!” Don’t let grandma bully you anymore! On the other hand, this little girl actually looks like what happens at grandma’s. It looks like grandma brushes her granddaughters hair with an egg-beater and then sprays 2 cans of AquaNet all over it….and then she wets it with the hose. Then, she takes that hose and hits this little girl in the eye. Seriously, I can only imagine what these “Harriet Carter photo shoots” must be like. I may not be a professional photographer, but all they really need to do was look at the picture and then say to themselves, “You know what? We should totally take this over again.” It really is that simple. Again, if this little girl is “what happens at grandma’s” then stay the hell away from grandma’s. They would have been better off putting that shirt on a dead woodchuck and taking the picture. Ok ok, I’ll be roasting in hell if you need me. Let’s move on.

Photo # 2 – You know what would totally dress up your trailer? Little cats wearing hats that sit on the top of your lamp shade. I know, brilliant right? Luckily Harriet Carter sells these. I know, go figure. Now these can totally be marketed at two totally different groups of people. (A) Spinsters and (2) Your crazy great-aunt who has finally just stopped taking her meds cold turkey. My thought though is that if you truly are a spinster, you probably already have these. I have a question. Who paints their wall that blue? Is that lamp in the sky? I can’t quite tell. With any luck those cats are flammable, will catch fire, burn down the trailer, and put you out of your misery. Thanks Harriet, but only you can prevent trailer fires.

Photo # 3 – Like I said before there are two things that Harriet Carter seems to be obsessed with; horses and death (but not combining the two). Harriet always likes to remind you that you are missing someone in your life. This time her death stone says the following: “If Tears Could Build a Stairway and Memories a Lane, I’d Walk Right Up to Heaven and Bring You Home Again.” Ok, so first off the words “lane” and “again” don’t rhyme, unless you say the word “again” with a British accent and say it like, “ah-gain.” Stupid. Second of all I kinda get the tears part for building stairs, but why the hell would you need a lane? My guess is that you probably would have the only stairs going up to heaven, so would you really need a lane for that? I mean it’s not like there will be tons of stair traffic. And I’m all for you walking up to heaven, but that’s a realllly long walk. Say for example I was in heaven. If you showed up and was all like, “hey I built some stairs, you wanna come back down to earth?” I’d be like, “thanks, but not really. Heaven is cool. I don’t have to work, I can eat whatever I want, and I have the best tan.” Good luck with the walk back down to earth jackass. I mean, not for nothing, but I’m not going to back to earth and have to re-open my checking account and beg my job to take me back. I kinda like not having to pay a mortgage. I’m all set, thanks though.

Photo # 4 – Have you been looking for the world’s most obnoxious umbrella? Well, I know this may come as a surprise to you, but guess who sells it? Harriet Carter! I know! Nothing says “high maintenance” quite like a see-through umbrella that covers your entire head. Take a look at that picture. Now, imagine walking up the street and seeing that chick coming at you with that shit-eating grin on her face. I hope that umbrella is “punch proof” because someone is going to totally kick her ass. And, again with the blue background? Are they taking this picture literally in the sky? Why the hell is she even using this umbrella? It looks like it’s partly sunny out. Wait a minute, maybe she built some “stairs of tears” and is heading up to heaven to bring someone home. Brilliant! Good job planning ahead lady! I apologize. Carry on.

That concludes another segment of Harriet Carter. God bless that crazy son-of-a-bitch!