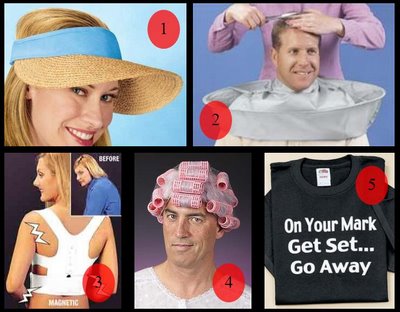 That’s right! Back by popular demand, I am pleased to say that Harriet Carter is back baby! Seriously, with all the absolute crap that they sell in the Harriet Carter catalog I will be able to post about her for months and months…and months. As long as she continues to peddle crap, I’ll be writing about it. Let’s get to it!
First off I’ve numbered each photo because, well, I’m fancy with photoshop. Look at the absolute high fashion in photo #1. Seriously, the brim is about 2 feet long and I also think that the brim is a legit old fashion table place mat. I think you can take it off, unfold it, and then place your plate, fork, knife, and glass right on it! Lunch on the go! I believe this was all the rage at Fashion Week recently. Something like this would totally cover Nicole Richie’s entire head. Wait a minute….!
Let’s scan to photo #2. Haircutting has never been easier and it never looked more fun! Nothing says “$100.00 haircut” quite like that contraption. That’s actually what it is; a contraption. I can almost hear this dude saying to his wife, “Honey can you give me a haircut?” And then she replies back, “Sure, honey, get the contraption.” What a complete horror show. This guy makes me so mad I hope he goes bald and then they can throw away that contraption.
Photo #3. I’ve spent hours searching and I cannot seem to find a more dramatic picture than photo #3. This lady is so bent over in the “before” photo that she has to be wheelchair bound. Seriously, if are that hunched over you don’t need a $14.99 back brace from Harriet Carter, you will literally need major spinal cord surgery. That will run you about $80,000. Also, once she puts on that back brace is she literally getting struck by lightning? Good for her! They should have a disclaimer on it though that lets you know as soon as you put it on you increase your chances of being struck by lightning by 99.9%.
Moving on to Photo #4. There’s not much to say about this one, except that it’s a dude with rollers in his hair. His hair is white. That is a man. Clearly he is getting ready for his pedophile convention. Sidenote…that looks like my 8th grade nun.
Finally, Photo #5 is such a snappy t-shirt with a hilarious saying on it that will keep your friends laughing for minutes. Not it doesn’t, it sucks. Now, cut that t-shirt in half and use it as curtains in your trailer because you know that’s where it’s heading anyway.
Well folks, that concludes another episode of “Harriet Carter.” Thanks for tuning in.