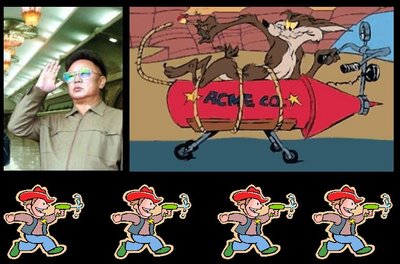 Oh that is so cute. Our rascally little villain from North Korea, Pyongyang, said that he was going to test out his nuclear weapon. Soooo cute. Didn’t the last time that Py-dong-wank test out his missiles they literally stayed in the air for about 10 seconds and then fell into the ocean with their tongues hanging out? Yup, keep testing them f*ckface, that’s a great idea. Just what we need, more war and higher gas prices. Is it just me or is Pydongwank like a cartoon character?

If you really want to convince him to not test out these missiles you would send two people over to North Korea. Rosie O’Donnell and Celine Dion. That’ll do the trick.