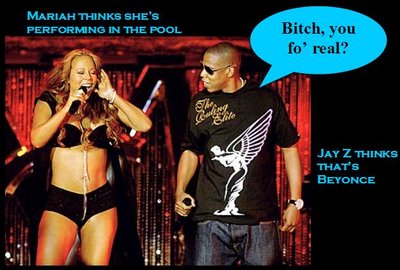 At Mariah Carey’s sold out NYC show, she not only wore what looks like Paula Abdul’s old bathing suit from Cold Hearted Snake, but also teamed up with Jay Z – her special guest star.

Who else was in the star studded audience you ask? Diddy. Yeah, that’s all I know because I wasn’t there. Does anyone want to hook me up with any tickets for anything? The Emmy Awards? The MTV Music Awards? Ok, I’ll watch from home 😉