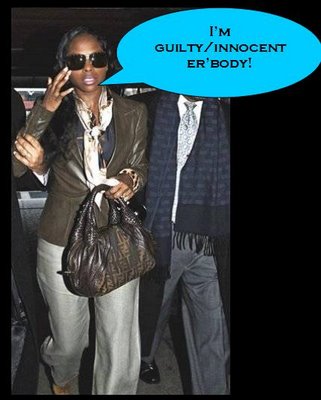 Rapper and Lil Kim spinoff, Foxy Brown, has plead guilty to assaulting two manicurists in NYC back in 2004. Nice diva move! Actually, she plead guilty and then found out she would have to serve 3-years of probation, check in with her probation officer, follow drug testings, and go to anger management classes.

Once that set in, about 20 minutes later Foxy Brown returned back to court and asked the judge if she could change her plea to “innocent.”

Awesome! Nothing makes you look more guilty than that! The judge is requiring Foxy to now submit her formal plea in writing. If she is found guilty, sentencing will begin on Oct 23rd.