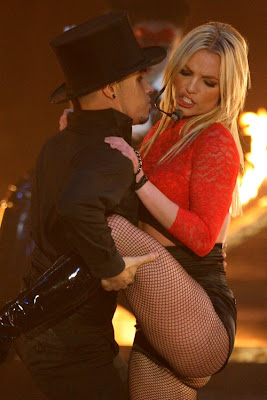 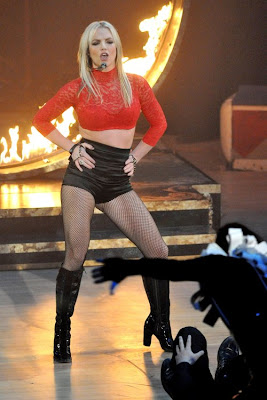 Sure I’m a day late and $4 dollars short, but after all the hate mail I received yesterday for not even mentioning Britney on Good Morning America, I figure I’m better late then never. Or is it “never late and better?” No idea.
Anyway, I didn’t want to post anything about Britney on GMA because after I had seen her on Britney: For the Record, I felt as though I was already going to hell. But since it’s a done deal, let’s talk about the “performance.”
Look, I’m indifferent on Britney. And by “indifferent” I of course mean “it doesn’t matter if I make sex with her in the front or back.” However, I guess like most loserish people I would like to see her do well in life. I mean, who can survive off of only $125 million?
While watching Britney on GMA, it looked like she was moving in slow motion. At one point she even looked towards her family, who were sitting in the audience, and sorta giggled a little bit….almost like, “Can you believe I’m not dead yet!”
When she was perfoming the “uppercut punches” while singing Womanizer I honestly thought that Mohammad Ali could do faster punches today. And I’m pretty sure he is wheel chair bound.
In conclusion, Britney seems distant to me. I’m sure she’s happier, but she just seems so far removed from herself, which is kind of sad because she was in the middle of a circus. Maybe next time she could flash her rack to liven herself up a bit? I’m not sure. I’m not a psychologist.
P.S –> I’ve seen “sideboob” before, but in the first picture I’m almost certain that is either “sideass” or “sidegina.”
www.myspace.com/ImBringingBloggingBack