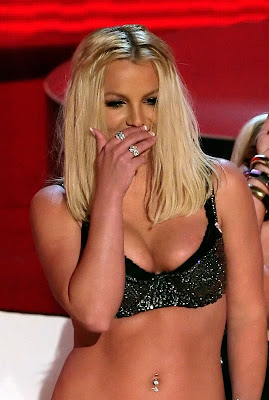 Happy Friday and welcome back to everyones favorite lazy segment called “This Time Last Year.” This Time Last Year will take a brief look at what was going on in the celebrity world…this time last year (go figure). Oh, and also I’m lazy so this is pretty easy to do on a Friday. Here’s what was going on with Britney and her music career…this time last year…
Dear Little Girls of the World,
Hey there. How are ya doing? Yeah? You doing ok in school? Yeah, sometimes math can be a little tricky. Don’t let those boys push you around during gym class either. Ok, come around here little girls of the world. IBBB has a little story for you.
Once upon a time there was a young girl named Britney Spears. She made it big on this show called “The Mickey Mouse Club.” Years later the music industry went crazy and all of a sudden brainwashed the world and people felt that Britney was an entertainer and could sing. Britney made a gazillion dollars and a few years later she went nuts. She would party like it was her job and show her vagina to anyone and everyone that would look at it. She had a couple of kids and got married. Technically this was her second marriage. Anyway, Britney then got divorced, drank more, partied more, shaved her head, became a whore, lost custody of her kids, smashed a few cars, and showed her vagina dozens and dozens and dozens of times. It really was a magical time. And all of this was at the ripe old age of 25.
Well. little girls of the world, while we don’t know yet how this story will end for Britney there is a major lesson for you to learn. A major lesson! And that lesson is if you drink a lot, dabble in drugs, and show your vagina a ton you too can have the #2 album in America. So put down those math books. Turn off your computers. Burn your science books. Just pick up the bottle of vodka and lose the underpants. As you’re getting off your school bus be sure to flash a little of your “gentlemen greeter” and you are well on your way to living The American Dream. Remember, life has no consequences. Now go run with these here scissors. Be good.
The End!