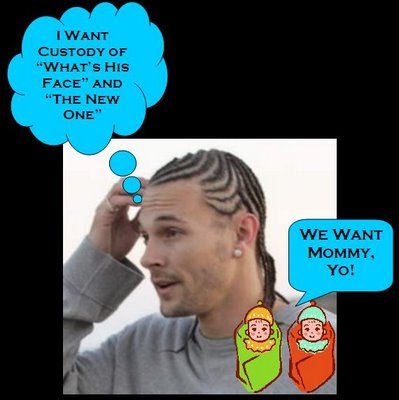 KFed is slinging the sass right back to Britney. According to Multiple Persons Magazine, KFed is looking for sole custody of his children. Um, sure that will happen. I can picture the court scene now. The judge will have to make a very difficult decision by choosing to give the children to Britney, who is worth tens of millions of dollars, or KFed who is worth ten of dollars. Oh, and did I mention that KFed’s latest concert in Chicago was actually for free? Yeah…meaning that the price of the tickets were $0.00. Now for those of you overseas reading this blog I don’t know what $0.00 converts to, but I think it breaks down to the following:
$0 Yen
$0 Rupees
$0 Pesos
$0 Seashells
A random legal analyst has said, “It’s not that unusual, but if you want to send a message that you want to be amicable, (both parties) would seek joint custody,” says Lynn Soodik, an L.A. family law specialist. “That he’s seeking sole custody leads me to believe they’re heading to a costly battle over the kids,” she adds.
You know what that means? If that gets messy I’m sure both Kevin and Britney will be airing each other’s dirty laundry and I’m NOT just talking about KFed’s skid-marked underpants. Let the games begin baby, yeah!
Who Claims This!?!?