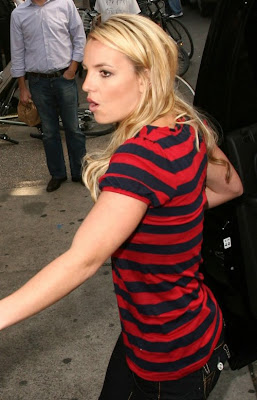 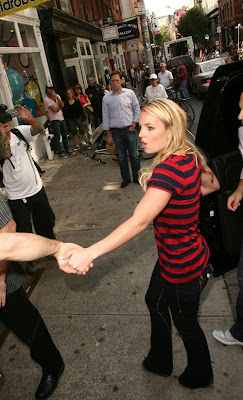 So close. So close. All Britney needed was Samantha Rotten’s hat and she could have 100% completed her Freddie Krueger costume! Well you can’t win ’em all.
Britney Spears has been playing in my backyard of NYC and was followed by the creepy paparazzi while she did a little shopping in SoHo yesterday. According to reports she tried to get into a jewelry store, but there were too many people surrounding her so she just got back in her car and left. Please, she thought LA was bad? Not only do you have your normal celebrity stalkers here in NYC, but 75% of the 2,000 people surrounding her were probably tourists thinking that Britney was putting on an outdoor play.

Meanwhile, Britney’s new song “Womanizer”has been getting a lot of radio play and was even featured as the first song on they played on The Hills Monday night. That’s all.