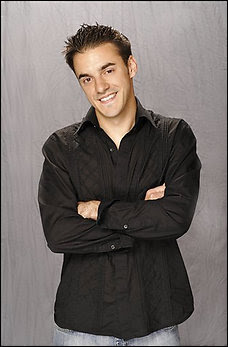 In case the 4 people who watch Big Brother happened to miss who won the $500,000, let me catch you up on that. Dan, the teacher from Dearborn, Mich beat out Memphis, the “mixologist” from Hollywood. Every sick-son-of-a-bitch in the jury house actually voted for Dan. Followers! Personally, I would have voted for Julie Chen’s leather pants. But that’s just me. You may have not voted for her pants. The “Viewers Choice” to give someone in the jury $25,000 went to Keesha.
While I sadly admit that I enjoy Big Brother, I must say I’m glad this season is over so that I never have to hear about Dan’s school and those damn kids he teaches and coaches. I never have to hear Dan talk in the diary room like he’s giving a speech at the Democratic National Convention. I hope to never hear the term, “Renegades” again and watch that retarded hand-slap and gun salute that he and Memphis would do that would make me embarrassed every time I saw it.
I’ll never have to hear Jerry’s raspy voice again. I’ll, sadly, never get to see Keesha’s missing tooth on the side that basically waved to me every time she smiled. I’ll, sadly, never get to hear Renny fight with people by saying, “What you just said. You just said it. Yeah, what you just said” and she’d never actually say what they said. I’ll never have to watch April pretend she isn’t the white trash that it’s apparent she is. I’ll never have to see Ollie and that stupid hat that covered most of his face and call Julie Chen, “Momma.” I’ll never have listen to Michelle’s horrible accent/voice (I can listen to my own horrible Boston accent, thank you very much). And, finally, I’ll never have to try to think about the person I totally forgot about and then finally remember it was Libra.
So, adios, Big Brother 10. It’s been a good summer. Well, it’s been a summer. See you in 2009, which seems so far away. I look forward to that time, though, where I watch the new cast of Big Brother 11 and try to remember even 3 people from the Big Brother 10 cast. That’s my challenge.