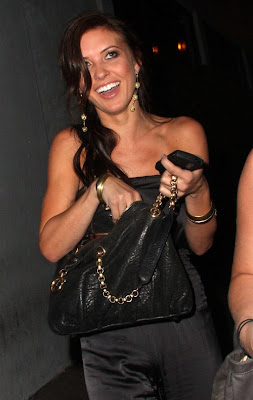 Your favorite teef transporter, Audrina from The Hills, was filming scenes for season 5 of The Hills at Beso restaurant in LA the other night. While she is all smiles (and I mean that literally) it appears that Audrina’s penis is being restrained. There. I said it. I don’t care. It’s Friday. I’m tired. It looks like Audrina has a penis. She has a dinky. Look at Audrina’s dinky. Look at her peepee. I just think we never noticed it before because we’re always hypnotized by those damn teef and then, months later, we began to be hypnotized by her store-bought rack. Never did we notice her penis. Well, it’s there.
P.S. For all those emailing me asking me, “When does season 5 of The Hills start?” How do I know?? Just kidding. March 2009.
www.myspace.com/ImBringingBloggingBack